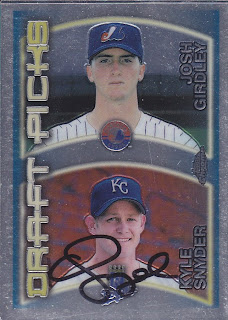 Here is the first chrome card that I ever got signed. I got this signature in 2004 when the Royals Caravan came to town. The caravan came to a local Buick dealership in the middle of a work day. Luckily, I wasn't working at the time (I had less than a month before I shipped off to basic training) and was able to go over there to get some cards signed. Kyle was paired up with Jimmy Gobble and Frank White. Unfortunately, I could only find one card each of Snyder and Gobble. I was able to go back through the line a second time and get some Royals postcards signed by the two and another Frank White card signed. The local card shop owner was there too, and had me rub the card with some pantyhose to take some of the gloss off of it. It seems to have worked out well.

Kyle was the Royals first round pick in 1999 (two Royals first rounders in a row). He only pitched in 29 games for the Royals before being picked up on waivers by the Red Sox. He had a little bit better success with Boston and posted a career best ERA of 3.81 in 2007. Last year, Kyle spent the entire season pitching for the Buffalo Bisons, the Mets AAA team.

Kyle signs his name very similar to Mike Stodolka in the fact that he doesn't lift his pen to sign his last name. Plus, they use the same style of "S", too.
at 7:15 PM

That would look great with Josh's sig too!