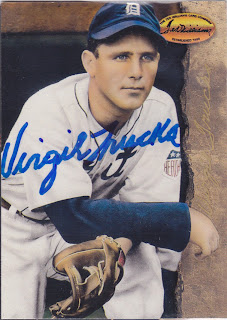 This is the third Virgil Trucks post on here. For the first one, I didn't have a card of him, so I sent him a Tigers sticker. For the second post, I sent him a 1954 Bowman card. On that second attempt, he threw this card in with it. So I ended up with a signed '54 card and a signed '94 card.

I posted a couple of cards from the 1993 Ted Williams set at the end of April. I had actually bought a few packs of that set at a card show. But, this is the first and only card from the 1994 set that I had ever seen. I thought that the Ted Williams set was out for only one year and was done. I wonder if they made a set in 1995.

Man, that is awesome! Trucks is really one of the coolest gents out there!

Thanks CCC. Like you said, Virgil is the man! Let me know how the book is.