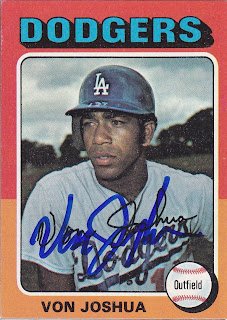 I got this card signed during my College World Series trip. When I went to the Iowa Cubs game on the opening day of the World Series, I was able to get three cards signed by Von Joshua. I wasn't able to get him to sign between games of the doubleheader, but he signed for everyone after the game on the way to the parking lot.

I was lucky that I went to that game when I did. By the time I got home from my trip, Von had been promoted up to the big league club to serve as their hitting coach.