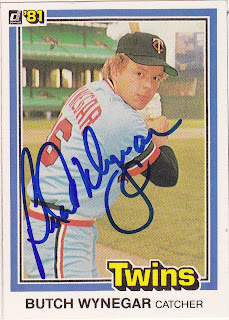 I got this card signed when I went to the Poconos earlier in the month. I mentioned in that post that I went to the Scranton/Wilkes-Barre Yankees game while I was there. Butch is their hitting coach.

That was the day that qualifying for the ARCA series got rained out. So, Joe Petty and I decided to head up to the game. We were running a little behind and by the time we got to the ballpark, there was a good-sized crowd by the Yankees dugout. So, I headed straight for the Durham Bulls dugout where there was only a handful of people congregated. I knew that it was going to be easier to get cards signed over there because there were less people. But, at the same time, I really wanted to get this card signed.

So, I asked Joe if he would try to get it signed for me. He seemed a little unsure of himself, so I gave him a crash course on who I needed and what numbers they were. Joe went on his way and obviously did a great job on getting this card signed for me. He even got an additional card signed by one of the players. Thanks, Joe!