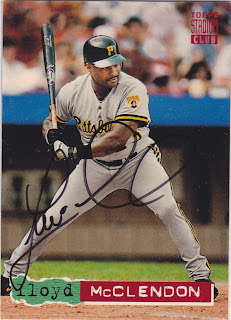 This is the third card in a row that was basically given to me out of the blue. The first two came from Padrographs last year. This one came from the Collective Troll just last month. The Troll was having a giveaway last month that featured some '87 Donruss Opening Day cards. I chimed in that I wanted the Royals team set, if it was available. CT emailed me back and said that it was mine.

Then the next day, he emailed me again to say that someone had claimed them before I had, but that he would make it up to me. I told him not to worry about it, but he sent me a package anyway. Well, this is the first card from that package that I have shown on here.

Lloyd played eight seasons with the Reds, Cubs, and Pirates. He never played in 100 games in a season despite being versatile enough to play first, third, outfield, or catcher. He was only a .244 career hitter. But, in three playoff series, hit hit .625 in 16 at-bats. He went on to manage the Pirates for five seasons and is currently the hitting coach for the Tigers.

I believe that this autograph was acquired during Spring Training at some point.

Check out how he signs his last name. It looks like a pretzel.
at 8:39 PM