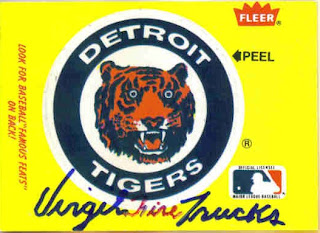 I put the "kind of" in the title because this isn't exactly an '86 Fleer card. It's obviously a sticker that came from the '86 Fleer set.

A few weeks ago, I came across a couple of websites that list home addresses for retired players. It seemed that Virgil was on all of the lists and I did not have a clue who he was. So I looked up his stats and he was a pitcher that pitched eighteen years (plus, missed almost two years during WWII) for five different ball clubs. He had one 20 and two 19 win seasons and a 19 loss season. His 19 loss season actually came the year before his only 20 win season. How strange is that? He wasn't much of a strikeout pitcher as his career high was 161. His second highest was 153 and that was in 275 innings pitched. But, here's the kicker. He is one of four pitchers all time to pitch two no-hitters in one year. That's Johnny Vander Meer, Allie Reynolds, and Nolan Ryan territory right there. That is what made me want to get his autograph. He did that in 1952 with the Tigers. Incidentally, this also happened to be the year that he lost 19 games. He went 5-19 and 40% of his wins were no-hitters. The first no-hitter was a 1-0 victory on May 15th over the Senators. It was his first win of the season. The second no-no was also a 1-0 victory, this time against the Yankees on August 25th. This was his last win of the year. His ERA was 3.97 which might be on the high side for 1952 (I might be wrong, it definitely would be a decent ERA today). But, he played on a horrible Tiger team. This team was about as bad as the 2003 Tigers. They went 50-104 and had pitchers that lost 20, 19 (Trucks), and 17 games. It's just an incredible story.

One reason I decided to just send a sticker is because I read that he'll sign your card and then give you a couple of extra signed cards. Here's the one that I got. 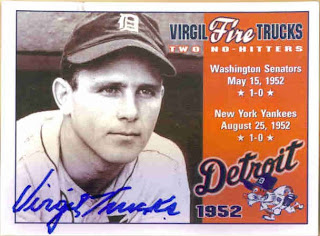 It's a cool card that he had made up to show off his two no-hitters. The only bad part about it is its size. It's about a half inch longer and wider than a standard baseball card. Plus, he also sent this. 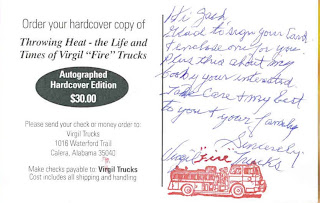 It's basically a personalized post card promoting his book. It's kind of hard to read (after all, Virgil is 91 years old), so this is what it says-
Hi Zach,
Glad to sign your card
& enclose one for you.
Plus this about my
book if your[sic] interested.
Take care & my best
to you & your family.
Sincerely,
Virgil "Fire" Trucks

What a nice guy. I might actually have to pony-up $30 for his book, especially after I sent him another card to sign. I bought a 1954 Bowman off ebay last week and sent it off earlier this week.

I love how he signs his nickname. He adds Fire before Trucks. But the best part is that he does Fire in red. Very cool.
at 10:21 PM