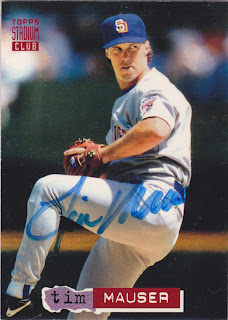 Here is another card that was given to me from Rod. This one features Tim Mauser, a relief pitcher that spent parts of four seasons in the big leagues. He made his Major League debut in 1991 with the Phillies. He pitched in three games that year and posted a 7.59 ERA. He spent all of 1992 in the minors and reemerged with the Phils in '93. After eight games with them, he was dealt to the Padres for Roger Mason.