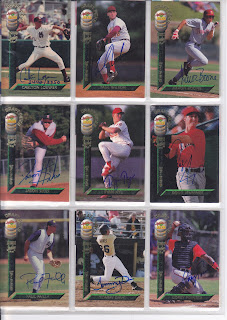 Well, I made it back from Pocono today. I went to one game while I was there and got to check out another baseball hot-spot. But, I will save that post for tomorrow. Tonight, I will finish up with the Signature Rookies Draft Picks and then do some catching up with the blogs.

Unlike the last page, only six of these guys got a chance in the Major Leagues.

Carlton Loewer- For some reason, this card was a short print autograph. Only 3,350 of these were signed. Carlton was drafted 23rd overall in the draft. I'm not sure why they thought he was so special that he didn't need to sign as many cards as the rest of the players.

Carlton made 41 appearances with the Phillies in 1998 and '99, with less than spectacular results. He resurfaced a couple more times as a Padre and didn't do well there, either. He has a 10-18 record as a Major Leaguer, with a 6.12 ERA.

Paul Wilson- Paul was the number one draft pick that year and this was the card to get. But, the thing that sucks about getting draft pick autograph cards is the wait. For most of these guys, I'm just now realizing that they ever made it to the Majors. That was not the case for Paul Wilson. I only had to wait two seasons for him to make his debut with the Mets. Then, after arm problems, I had to wait four more seasons for him to appear again in the Majors with the D-Rays. He went on to pitch for the Reds and seemed to be doing pretty well until he had more arm problems in 2005. He spent all 0f '06 in the minors and was released by the Reds in Spring Training in 2007. He tried to make a comeback last year with Reno in the Golden Baseball League, but got released after five games.

For me, my lasting memory of Paul Wilson will be him getting speared by Kyle Farnsworth.

Aaron Boone- Here is a card that I didn't realize I had for some time. I always had the card, I just didn't realize that I had a card of an everyday Major League player until maybe 2001 or 2002. Aaron will probably be remembered the most for his pennant winning home run off of Tim Wakefield.

Aaron was supposed to play for the Astros this year, but he ended up having heart surgery in March.

Jason Nye- Jason made five appearances with the Phillies in 1997 and '98. He had five Major League appearances and was 0-2 with a 9.69 ERA. He recorded 10 strikeouts, but issued 9 walks.

Doug Jennings- Here is another questionable addition to this set. By the time this set came out, Doug's Major League playing days were over. Doug was a second round pick in 1984. He made his Major League debut in 1988 with the A's and played his final Major league game with the Cubs in 1993. On this card, he appears to be wearing an Indianapolis batting jersey. Maybe this was 10-year anniversary of the '84 draft commemorative card.

Tommy Davis- Tommy Davis' Major League was very short. In 1999, he went 1-6 with the Orioles. He played three more seasons in AAA, but he never got another shot in the big leagues. At least he got a taste.

Also, there is still time to enter Trader Crack's contest for a Razor Cut Signature. You don't want to miss out on this one.
at 9:25 PM