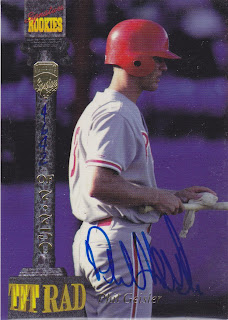 I got this card in a pack of Tetrad in 1994. Tetrad was Signature Rookies version if Classic 4-Sport. I'm not sure if they had hockey cards in the product or not, but they did have baseball, basketball, and football. Each pack had one autograph in it. I only bought a few packs of Tetrad and my best autograph is of the late basketball player, Yinka Dare.

As for Phil, he was a career minor leaguer. He was the Phillies number three prospect in 1994. While he raked in the lower levels of the minors, he really struggled in AAA. In '94, he hit .197 for Scranton/Wilkes-Barre in 183 at-bats. The next season, he hit .186 in limited at-bats for SWB. He went to the Mets organization after that and hit just over .250 in AA ('96) and AAA (97). In 1998, he played 42 games with three different teams at the AAA level. That was his final year in pro ball.