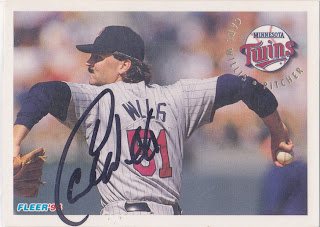 I got back from St. Louis very late last night and should be getting ready for work right now. But, I figured that I would do a quick post. After work (and home run derby) and during the celebrity softball game (which I will be watching for the first time), I will do a post about my weekend.

But first, here is the third and final card from the Indians pitching coach, Carl Willis. This card was signed at the Astros-Indians exhibition game in Houston right before the season started. Here is the first card I posted of him and here is the second. Out of the three cards, this one has the best photo. They could have cropped it a little bit better, though, so that part of his wrist and glove were not chopped off.

This was the first card from the set that I got signed in person. And if you really want to get picky, you could say that this is the only card from this set that I have signed.
at 2:23 PM

Maybe it's just the awesome photo, but you're right, this one is my favorite of the three.

Also, there's not a lot going on with the card design in this set, so the autograph really stands out. On that note, I can't imagine what a 1995 Fleer autograph would look like. Those cards were crazy. But maybe you ventured down that path...I'll have to wait and see!

The '95's are outlandish and I try to avoid them. They are usually way too dark to even mess with and I have yet to get one signed. Luckily, I do not have too many of them and I usually skip them .

Ha, outlandish. That is so true. Good thinking not getting them signed.