At 4:43 am, I had the first entry emailed to me. That entry was good enough to take the prize. The winner is Brian. 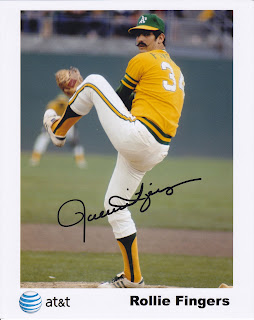 Here is another look at the picture that Brian had to decipher. 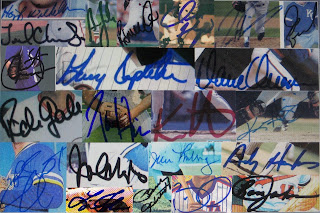 For those of you playing at home, here are the answers in a sort of left to right, top to down fashion.

While going back through the blog entries (twice), Brian left a few comments. Because of those, I can see that it took Brian well over two hours to come up with the correct answers. By 2:30, he had made his way back to 1992 Score (Will Clark). Fifteen minutes later, he was back to 1992 Donruss (Dave Nilsson). An hour and a half after that, he had made it back to 1983 Topps (Ron Jackson). Half an hour later, he had his guesses in. So, in a way, he kind of left a trail while coming up with the correct answers.

Congratulations, Brian! Send me your address and your favorite team and I will get the 8x10 out to you sometime this week. Since you were the only entry, I'll throw in some extra cards. I am guessing that you are a Rangers fan, but I have been wrong once before. Also, I am curious as to which signatures were the hardest ones. I have an idea, but I want to know what you thought. Just leave that info in the comment section.

And for everyone else, I was wondering if anyone else even thought about attempting this or did it seem like too much trouble or not a good enough prize (or both)?

On a side note, when I was putting the collage of signatures together, the program I was using hit a snag. I got the "this program has encountered a problem and needs to shut down" line. I hadn't saved it at all and was one signature away from finishing it. So, I took a picture of it with my camera and used that photo to finish it. That why many of the signatures look pretty crappy. I redid a few of the ones that seemed darker, but most of them I left as they were.
at 11:31 AM

I was going to give this a try today but got beat to the prize. Nice work Brian.

As always with contests like this (the Andy contest at the Traded blog was the same thing), you need a lot of time to decipher it. I don't have a lot of time to spend on the computer -- basically enough to scan some images and come up with a post, leave a few comments, and then the family takes over.

But I'm glad others do have the time. Getting people to think is a good thing.

I saw this at 11pm MST last night... knew it would a couple of hours, and decided to try maybe today. I guess I would've won had I just did it, but a movie with the wife on the couch won out.

Yeah, for some reason, I tried to make it fairly hard. I tried to keep as many jerseys out of it as I could, as well as well-known players. Don't ask me why I did it that, I guess that I felt like challenging someone.

Thanks! It was tougher than I thought it was going to be, but being new to your blog (and the others I've been reading) it was great to go back and look through your old posts. Part of what took so long was reading the stories behind the autos. The last one I figured out was Bob McClure. The others that were the toughest were Luis Pujols, Paul Faries and Jim Eisenreich. The Eisenreich was tough because I printed the page out and it cut off the edge of the right edge and I didn't know it was a KC player until I found it. You're right about my favorite team...the Rangers. I'm watching them try to hold off the Angels right now. I'll email the address and thanks again.

On a side note, I just discovered your blog and other card blogs in the last week...I've been missing out and have really enjoyed reading all of them. Keep the stories coming and maybe I'll join the blogging ranks soon.

I wouldn't have guess Bob McClure. I thought that Pujols was going to be the toughest one.

I got your address and I will get the stuff out to you on Friday. Congratulations, you certianly earned it!

I got the package in the mail today!! Thanks so much. My 9 year old said Rollie has an "awesome stash". I had to agree. Thanks for the cards too...I appreciate it. If I get my blog started, I'll have to give you thanks there as well.