A pack of Phungo cards

When I got home from work yesterday, I was surprised to find a pack of Phungo cards in the mail. Deal sent me the pack as a way of saying thanks after coming in second in the last contest and being stuck with the Grienke signed Sports Illustrated.

I must have recieved a hot pack (I feel like I work for Beckett) since I got one autograph and four insert cards in the pack. But first, here are the base cards. 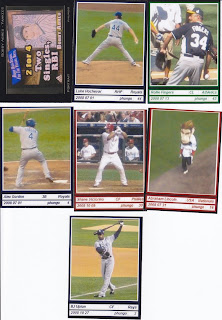 The base cards included (in no particular order):
Abraham Lincoln- maybe the coolest card in the pack
Shane Victorino- a World Series card that was recently featured on Phungo
Alex Gordon- always nice to get a Royal in a pack
Luke Hochevar- TWO Royals in one pack!
BJ Upton- another World Series card
Bobby Abreu- a cool card taken from the Yankees video board, I believe
Rollie Fingers- a card from last years All-Star celebrity softball game

Speaking of the celebrity softball game, I got a random email from Deal about two weeks ago telling me that I should go to the Futures Game (the softball game is right after the Futures Game, that is how Rollie ties into this). Why I couldn't think of that myself is beyond me, but luckily there was someone out there to point out the obvious. Since that day, I've been planning on going to see it and I even received my tickets a couple of days ago.

The Futures Game brings me to the insert cards in the pack- three Donruss Threads cards of players that will be appearing in the game. 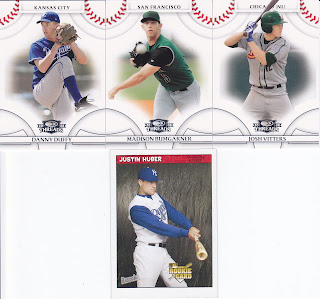 There was also a random Justin Huber card. Justin Huber, of course, is the only Royal whose Dad I have met. Justin is Australian and I met his Dad in Kansas City a couple of years ago after he got a September call-up. His Dad said that he tries to come to the States for a few weeks every year to see his son play. He was a real nice guy and encouraged me to make it to Australia sometime. Justin is currently playing for Rochester and I may send this card to him.

Yes even the crew at Phungo is prone to sending out Hot Packs - love it.

very nice write up thanks.

Definitely hope you can get some autos next wkend.