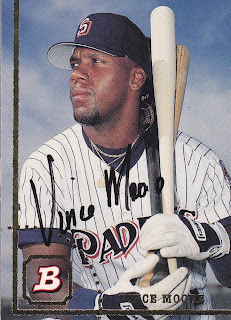 First off, you may have noticed I finally got a new header. It's a little bigger than I wanted, but it will work. I guess that the only problem I was having is that it wasn't saved as a jpeg. Who would have thought?

As for the card, this is another Padrograph. This is, however, the first Padrograph on here of a player that never played for the Padres. Vince was a career minor leaguer that never got above AA. In fact, he played parts of five seasons with the Rancho Cucamonga Quakes in the California League. The California League is known as a hitters league, so it's not good if you can't hit in it.

Vince was a .265 career hitter, but that number is bolstered by his stats he put up in the Texas-Louisiana League and the Central League. While in affiliated ball, he only hit over .250 three times. In his seven seasons in the indy leagues, he only hit under .250 once.

One thing hurting his average was his strikeouts. In 4,374 minor league at-bats, Vince struck out 1,251 times. He had four seasons with over 100 strikeouts and did it once in only 299 at-bats. While he wasn't striking out at the pace Chris Davis is this year, he wasn't exactly tearing up the minor leagues.

You may have noticed that there were two Padrographs in a row. This will happen two more times as I go through my autographed cards from 1994.

There you go, you figured it out. Looks good!