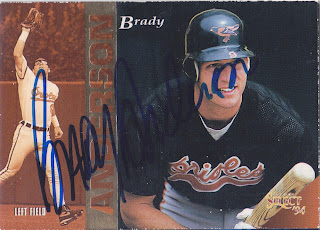 I picked this card up in a trade. It was actually my first trade that only involved autographed cards. One day, I got an email from a guy that wanted a couple of '89 Donruss that I had signed. The email came from Derick, who runs DK's Baseball Signatures. Derick is trying to get his '89 Donruss set autographed and he asked if I would be willing to part with my Dickie Thon and Bob Dernier. I only have one Dickie Thon autograph, so I kept that one. But, I have three autographs from Dernier, so I traded one for this Brady, straight up. The edges of the Brady card are a little beat-up. But, it's Brady Anderson, so I'm not too worried about.

If you get a chance, check out Derick's site. He has 77% of the '89 Donruss set signed, so he still needs a little help. He is also trying to get the '95 Score set signed and the 2000 Victory set. If you have any cards that would move him toward his goal, he has a trade list of cards he is willing to part with. That is where I picked this card from.
at 7:50 PM

Thanks for the shout out Zach!

No problem. Thanks for the card.

As for the PS3, I don't get online with it much. I was on for the last two days since I didn't have my computer, but that was the first time in three months. I just don't have any good online games. But, next time I get on, I will look you up.

Funny how some players take great care not to sign on their image and some just sign right over their face!

That's much better than the Brady Anderson sig I got when he was with the Padres. Seriously looks like he was pretending he was a 2 year old and just scribbled all over my 8x10. I'll have to scan it sometime.