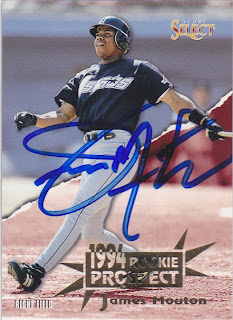 Here is another James Mouton card that I got signed at Astros Fanfest right before the season started. This is the second Mouton autograph that I have shown on here. The first one was posted back in April, about a week after 'Strosfest.

James, in my opinion, falls into the same catagory that John Hudek and Brian Williams fell into. To me, they seem like some lesser players that had very short tenures with the team. I've only been to one 'Strosfest and I am hoping that these guys aren't invited every year. If they aren't, then it is a great idea to have some different lesser players come in every year. It wouldn't be much fun to go to the event every year if it is just the same people signing. That is how Royals Fanfest is starting to look after only its second year. Hopefully, both teams will mix it up next year, even though I probably will not be going to either one.

These rookie prospect cards are completely different than the base cards. They still keep a portion of the front tinted, but that is about the only resemblence to the base cards. I do, for some reason, like the tear going through the card. It is very subtle and divides the tint and non-tint nicely.
at 11:20 PM