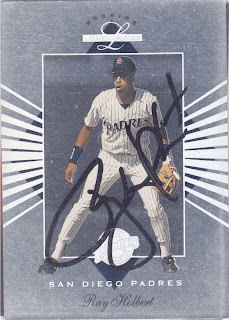 Here is another card from Rod, of Padrographs. This one is of Ray Holbert, a player with 202 Major League at-bats spread out over five seasons with the Padres, Braves, Expos, and Royals. In 2000, Ray played in three games with the Royals and got one hit, the last hit he ever had in the big leagues. By coincidence, I was at two of those games that year and saw his final hit.

His final hit came on June 18 against the A's Gil Heredia. That game is memorable for me because it was the worst beating that the Royals have taken in their 40 year history. On that day, they lost 21-3. Ray went into the game as a defensive replacement in the fifth inning. At that point, the Royals were down 17-2. He came up in the sixth and hit a 2-1 pitch for a single that moved Mike Sweeney from first to third. I wonder if Ray remembers his last hit like I do. Hopefully, his memory is a little more special to him than it is to me.

I don't remember too much about Leaf Limited. They are an overly foiled card and I am sure that they were not cheap. That is about all that I know of them. The signature shows up real nicely on this one, though.

Interestingly, there is no position listed on this card.
at 6:21 PM

Yeah, they were not cheap, at least on your parent's allowance. About $1 per card. A couple of packs were $8 or $9 easy.

Wow, I didn't realize they were that expensive.