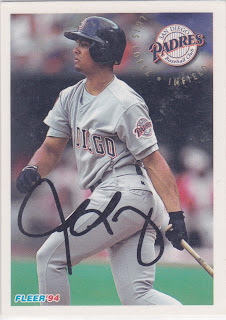 This card is another card that Rod, from Padrographs, sent to me. Before I got the package, I didn't have a single '94 Fleer card signed, let alone an update card. In fact, I didn't have any '94 update cards at all. Now I have two and they are both signed.

Luis is one of three Luis Lopez's to play in the Major Leagues. This Luis Lopez was by far the most successful of the three and he played in 629 more games than the other two combined. He spent parts of 11 seasons in the Majors with five different teams. In 1998, he appeared in 117 games with the Mets. That was the only season that he played in over a hundred games.

Luis has an original signature. It reminds of the ribbon magnets that you see on cars for supporting the troops or breast cancer awareness or something. It looks like he makes three of those with each one orientated in a slightly different direction.
at 4:56 PM