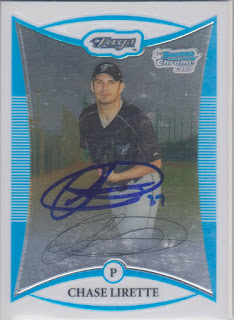 On the way to the Future's Game in 2009, my dad and I took the scenic route. And by scenic, I mean that we ventured up to Burlington, Iowa to watch the Royals Midwest League team play. They were hosting the Jays affiliate that night.

Once I got inside the park, I hit up the team store and bought a Bees team set. With that set in hand, I set up shop on the home side of the field to get as many of those cards signed as I could. I tasked my dad 'graphing the visitor's side. I only had three or four cards for him to get signed and he succeeded with two of those. This is one of them.

Like that last player that I posted that signed in Burlington, David Wood, Chase was out of baseball after that 2009 season, too. Unlike Wood, though, he did not have a great 2007 season. So, I am a little surprised he even got a card in this set. In '07, Chase pitched in just 10 games and was 5-5 with a 4.42 ERA while striking out 41 in 59 innings of work in the Midwest League. He ended up dropping down to the rookie level in 2008, where he again pitched in 10 games, before repeating that Midwest League in '09. While he pitched more in '09 than any other season, appearing in 20 games and 85.1 innings, he was just 4-3 with a 5.70 ERA and 53 strikeouts.