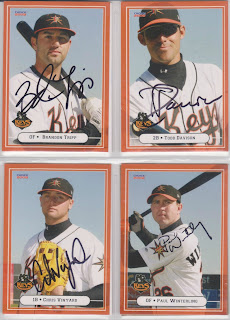 Here are a few cards from the 2008 Frederick Keys team set that was put out by Choice. I acquired these cards in a care package from Ryan of The Great Orioles Autograph Project fame. I assume that he got them signed in person at a Keys game in 2008.

Unfortunately, none of these guys made it very far in baseball. Three of the four were out of pro ball by the end of the 2009 season and never made it to AA. The only one that played past 2009 was Brandon Tripp. He made it to AA in the Phillies organization in 2012. But, that was his last year in affiliated ball, though he would go on to play in the American Association through the 2014 season. So, I guess that makes him the most accomplished one in the bunch.

As for the 2008 Keys, they finished their season 63-76, which placed them third in the four team North Division of the Carolina League. Notable names on their roster included Matt Wieters and Jake Arrieta.
at 6:50 AM