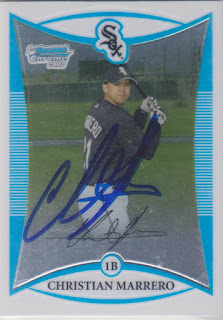 Here is a card that I got signed in Birmingham, Alabama at the 2010 Rickwood Classic. Christian was playing for the hometown Birmingham Barons that day and he was nice enough to stop and sign my lone card after hitting some soft toss on the field.

Christian played minor league baseball for a dozen years, all the way through the 2017 season. During that time, he played in the White Sox, Braves, Pirates, and Phillies organizations and even got in some Mexican League and independent baseball.

The crazy thing about Christian's career is that out of his twelve seasons of professional baseball, he only played 80 games in AAA. Christian was basically a career AA player. He spent parts of nine seasons at that level including four and a half seasons with the Barons.