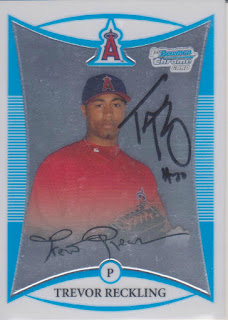 Here is a card that I got signed at the Futures Game in St. Louis in 2009. Trevor was an up-and-comer for the Angels at the time and I was lucky enough to get this one card signed by him. While his signature is not readable and looks nothing like the pre-printed one on the card, it sure does look stylish.

During his Futures Game season, Trevor tore up the Texas League. At just 20 years of age, he was 8-7 with a 2.93 ERA and 106 strikeouts. Not only did he appear in the Futures Game, but he was a league All Star and represented the USA in the IBAF World Cup after the season.

Unfortunately, he would never repeat those numbers again. 2010 was split between AA and AAA and he was 7-13 between the two levels with a 6.42 ERA. He pitched parts of two more seasons in the Halos system before they let him go.

He spent two seasons trying to work it out in independent leagues, but 2015 is the last year that I can find stats for him. According to his Wikipedia page, he is pitching in Denmark. But, I didn't see him on a roster, so that might not have worked out either.

That just goes to show how hit and miss it can be prospecting in baseball. Even the brightest stars of tomorrow never make it to The Show to shine.
at 1:02 AM