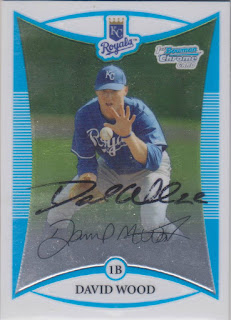 In 2009, St. Louis hosted the All Star Game and I thought that it would be cool to go to the event in some way, shape, or form. I didn't want to shell out the money to go to the actual game, so I decided to go to the Future's Game. The Future's Game is held on the Sunday before the All Star Game, so we left home Saturday morning and drove to Burlington, Iowa to catch a Burlington Bees game. The Bees were a Royals affiliate at the time and I thought it would be fun to see some of the up and comers at that level.

I had a great time at that game. I loved the ballpark and I did pretty well with autographs. I did not have too many cards with me to get signed, but I picked up a Bees teamset and got a lot of those signed. This is one of the cards that I actually had and I got David to sign it and his Bees card for me.

The next day, we were off to St. Louis for the Future's Game and a four hour rain delay. Since we had a six hour drive home and work on Monday, we had to skip the celebrity softball game just to get on the road at a somewhat decent time.

At the time, I had no idea about All Star Fanfest. But, I ended up going to that when it was in Kansas City and I absolutely loved it. If I had to do that weekend over again, I might choose Fanfest over Burlington. I guess it would just depend on who would be at Fanfest that day to sign.

As for David, he had an extremely short career. He hit .318 in the Arizona League in 2007 to warrant this card. He got bumped to high-A in 2008 and struggled mightily for 37 games before being demoted to rookie ball in the Appalachian League. He spent all of 2009 with the Bees and had a good season, hitting .270 with 8 home runs and 62 RBI. Then he was done with baseball. I don't know if they Royals just expected more from a college draft pick or if David decided that minor league baseball wasn't his thing. Either way, that is the shortest career of any player that I have posted from this set. 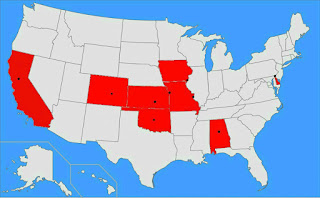