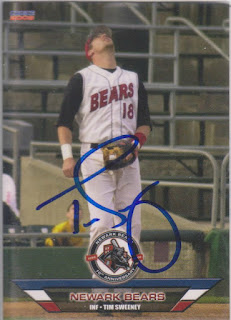 Yesterday, I posted four Choice minor league cards that were given to me by another blogger. Today, I have one more. This one is from Paul, from Paul's Random Stuff fame. He sent this to me a few years ago with some other goodies.

Tim had a really short professional career. He was drafted by the Expos in the 20th round of the 2002 draft and he was out of baseball after the 2003 season after just playing 105 games and hitting .201. He then emerged with the Aiken Foxhounds of the South Coast League in 2007 before joining the Atlantic League's Newark Bears in 2008. How he managed to not play for three seasons before coming back to a league that I had never heard of and then playing a season in the Atlantic League is beyond me.

The Atlantic League is the cream of the crop of independent baseball with many former Major Leaguers playing in it. In fact, MLB just signed an agreement with the league to try out possible new rule changes there before implementing them at the Major League level. The funny thing is that this guy, that hit .201 in lower A ball, did well in the Atlantic League. Though he played in just 37 games, Tim managed to hit .273 with 12 RBI. He even pitched a scoreless inning.

Tim hung up the cleats for good after that one season with Newark. But, we have this cool card of him to commemorate his last season playing professional ball.
at 12:04 AM