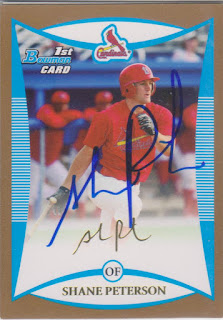 Here is a card that I got signed in 2010 at a Tulsa Drillers game I attended. Shane was playing for the visiting Midland RockHounds at the time. It took a few tries to get him to come over and sign, but I eventually got him before he went back into the clubhouse.

Shane has played parts of three seasons in the Majors. He got his first taste of action with the A's in 2013 when he got into 2 games with them. He then played in 93 games with the Brewers in 2015. His last big league action came with the Rays in 2017 when he got into 30 games. Over those 125 games, Shane has hit .254 with 4 home runs and 28 RBI. Since this is an odd year, maybe he will resurface on a Major League roster at some point in the year.

After spending last season on the Padres AAA team in El Paso, it looks like Shane will be heading to Dodgers camp next week as a non-roster invitee. So, more than likely, he will be spending his summer in Oklahoma City.

Shane was originally a second round pick of the Cardinals out of Long Beach State. The Cards dealt him to the A's when they landed Matt Holliday. Even though the A's also got two other players in that deal, I think that the Cardinals got the better end of that deal.
at 8:59 AM