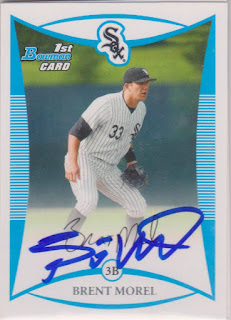 Here is a card that I got signed at an Omaha Storm Chasers game in 2015. Brent was playing for the visiting Nashville Sounds at the time and I asked him to sign when he came out of the clubhouse. He was one of the last guys out and running a little late, so he told me he would get me after the game. I have heard that line, or one similar, hundreds of times and it is very rare for a player to uphold his promise. But, low and behold, Brent actually came through. I was quite amazed.

That was the second time I tried to get this card signed. The first one was at the Rickwood Classic in 2010. I didn't have a smartphone at the time, so I printed off rosters for the teams I would be seeing before I left for my trip. When I got to Birmingham, the Barons were wearing throwback uniforms without player names on them. So, I found his number and kept calling out for Brent and he kept ignoring me. After a bit, he finally turns around and tells me that he wasn't Brent and that Brent had been promoted to AAA. D'oh!

2015 was the last time Brent played in the Majors and in the States. He took his game to Japan for two seasons before apparently calling it a career after the 2017 season.

Nebraska has been added to the 2008 Bowman map. This is the last addition to this map for now. It looks like the final tally is that I got cards signed in fifteen cities and twelve states. 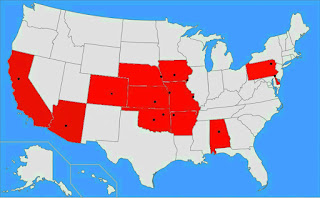