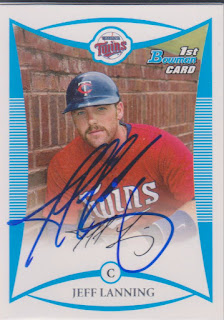 Here is a card that I got signed at a Wichita Wingnuts game in 2012 while Jeff was playing for the Can-Am League's New Jersey Jackals. For a couple of years, the Can-Am and the American Association each had an odd number of teams. To counteract that, the leagues added interleague to the schedule so that there was always one interleague series going on. I thought it was a cool idea to combat the odd number of teams. The only problem, for me at least, was that the Jackals were the only team to travel to Wichita. But, on the day I got this card signed, I came home with 33 signed cards. That was my record for a Winguts game.

Jeff's career spanned five seasons. He played two years in the Twins organization before moving on to the Phillies for two years. He then played one season for New Jersey. Through all of that, he played in 223 games and never got above high-A. He was a .256 hitter that had 25 home runs and 102 RBI.

The funny thing about Jeff's career is that he never played in more than 53 games in any season. I guess it goes to show that even the lowest levels of the minor leagues need back-up catchers.