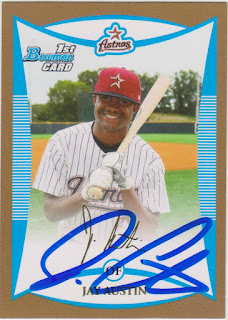 Here is a card that I got signed at a Wingnuts game last summer. Jay was playing for the Sioux City Explorers last year and I got him to sign this one card by the X's visiting dugout.

Jay was taken by the Astros in the second round of the 2008 draft out of high school. He made his professional debut later that summer at the age of seventeen and played in the Astros system through 2012. Unfortunately, he struggled in affiliated ball and never got above A ball in his days of playing.

He took 2013 off before joining the indy ranks in 2014. Since then, he has played in the Frontier League, Can-Am League, American Association, as well as some Mexican fall league. Considering that he is only twenty-eight years old and that he hit .364 in the American Association, I would think that he would still have some ball left him.