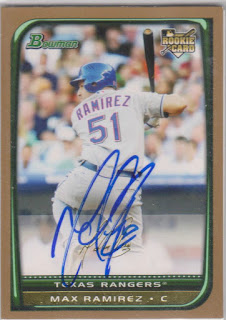 Here is a card that I got signed in Des Moines, Iowa in 2013 while Max was playing for the Iowa Cubs. That was part of a College World Series trip. To make the yearly pilgrimage more enjoyable, we drove through Omaha and kept on going to Des Moines on our first day of the trip. We went to a Storm Chasers/Cubs game that night before heading back to Omaha for a couple of days of the CWS. I am still waiting for the day that the Chasers have a home game on opening weekend of the Series.

Max played in just 45 Major League games in 2008 and 2010. In each of those seasons, he managed to hit .217 and is a career .217 hitter. He also hit two home runs in each season though he played in a few more games in 2010. Incidentally, his first home run was hit off of Roy Oswalt. It was a two run shot that put the Rangers up 3-2 in the fourth inning and the score held for the rest of the game. If he had hit that in 1985, he would have been credited with a game winning RBI.

Even though Max hasn't played in the Majors since 2010, he is still playing pro ball. He has spent the past four seasons playing in the Mexican League, though he played just twelve games last year. He played this winter, too, so it would appear that he is still wanting to play this summer.
at 8:30 AM