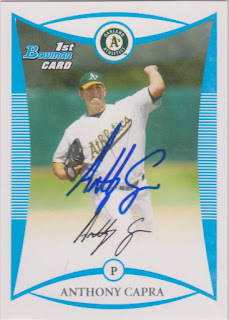 Here is a card that I got signed at a Tulsa Drillers game in 2010. Anthony was playing for the visiting Midland RockHounds that summer. At the game I was at, he had the night off and was charged with charting pitches from the stands. A fellow collector pointed him out to me and I was able to get him to sign this card for me right before the game started.

When I got this card signed, I also got one signed by Travis Banwart, who was helping Anthony chart pitches. Those two players have a lot in common. They both pitched at Wichita State. They were both taken in the fourth round by the A's. They both played together for a couple of seasons in the minors. And they both ended up in the American Association, playing for the Wichita Wingnuts. But, ultimately, Travis had a more successful career than Anthony did.

Anthony was out of affiliated ball before the 2012 season was over. He pitched in just one AAA game and the majority of his affiliated time was in some sort of A ball. He then joined the Wingnuts in 2012 after the A's released him. He pitched in Wichita for five seasons before retiring and becoming the teams pitching coach for the 2017 season. He held that role for two seasons before the club disbanded following the 2018 campaign.

You have got to love it when a player's autograph looks exactly like the pre-printed signature on the card.
at 6:39 AM