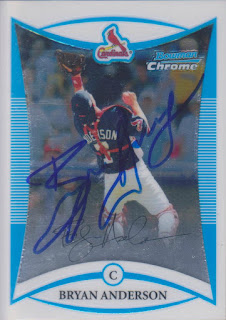 Here is a card that I got signed at an Omaha Storm Chasers game in 2016. Bryan was playing with the visiting Nashville Sounds at the time and he stopped and signed three cards on his way to the field.

At the time, Brian was rocking some long hair. It looked similar to his picture on his Baseball-Reference site, but it was past his shoulders at that point. He looked more like a roadie than a professional ballplayer. It was quite impressive.

Bryan had a relatively short Major League career. Though he played in the bigs during five different seasons, he only got to play in 40 Major League games. Of those 40, only 16 were starts.

Bryan's last season playing ball was that 2016 minor league season. Over his 40 games with the Cardinals, White Sox, and A's, he was a .221 hitter with 4 doubles, no home runs, and 7 RBI. He finished with more strikeouts than hits.
at 2:24 AM