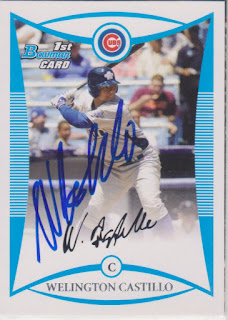 Here is another card that I got signed at an Iowa Cubs game. The last card I posted from an I-Cubs game was signed in 2013 during an out of the way game during the College World Series. This one was obtained in 2011 on the way home from a Minnesota Twins game.

Welington was a super-friendly guy that would sign about anything. I had three cards of him and he signed all three. One kid had over a dozen cards of him and he signed them all, but not without giving the kid crap about selling his autographs. He was just joking with the kid and it was good to see that kind of interaction between a fan and player.

So far, Welington has played in the Majors every year since 2010. He spent the first five and a half seasons with the Cubs before bouncing around after that. Since 2015, he has played with the Mariners, Diamondbacks, Orioles, and is now currently with the White Sox.

He signed a two-year deal with the White Sox after that, but had a rough season last year in his first year with the South Siders. Injuries limited him to just 49 games, though he did hit .259 with 6 dingers and 15 RBI in his limited action. I am sure he will be looking to bounce back this season so the Sox will pick up his option for 2020.