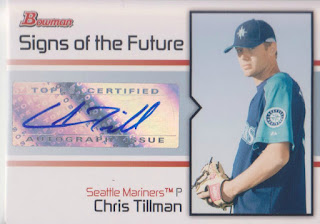 Here is a card that I pulled out of a pack in 2008. If it wasn't for this card, I never would have known that Tillman was originally drafted by the Mariners. But, before he could ever debut with them, they shipped him to the O's for Erik Bedard. Considering that Baltimore also got Adam Jones in the deal and that those two players played for the team for ten years each, I would say that the O's got the better end of that deal.

In ten seasons with the O's, Chris amassed a record of 74-60 with a 4.57 ERA and 847 strikeouts. He had double-digit win totals four times and topped out at 16 wins twice. He never made an All Star team, but he did pitch in three postseason games.

After winning 16 games for a second time in 2016, Chris has had a rough go of it since. He ended up getting demoted to the bullpen in 2017 and he only pitched in seven games last year before getting designated for assignment. Over that span, his record is 2-12 with a 8.46 ERA in 119.2 innings of work. That might help explain why the thirty year-old is currently a free agent.

It is still early in Spring Training, so I would think that there is a team out there willing to take a chance on Chris with a cheap incentive-laden deal. We will see.
at 11:55 PM