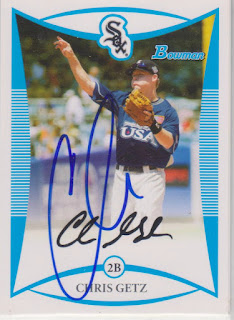 Here is a card that I got signed outside of Kauffman Stadium in 2013 while Chris was with the Royals. That was about the time that the Royals became bad signers at home, so Chris was the only Royal I got that day. The Rangers were in town that afternoon and I did much better with them.

Chis played in the Majors for parts of seven seasons with the White Sox, Royals, and Blue Jays. Over that time, he hit .250 with 3 home runs, 111 RBI, and 89 stolen bases. His best season was with the White Sox in 2009. That year, he hit .261 with 18 doubles, 2 dingers, and 31 RBI. He did so well that season that Topps named him to their All-Rookie Team. The White Sox rewarded him by trading him to the Royals for Mark Teahan. I am going to call that trade a push.

These days, Chris is back with the White Sox as their director of player development.

Based off of a couple of other autographs that I have gotten from Chris, it would appear that Chris only signed his first name on this card. I guess that is just how his hurried ballpark signature comes out.
at 7:01 AM