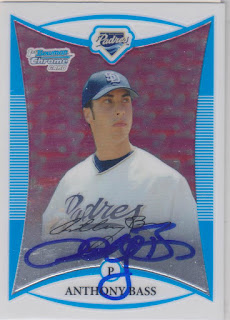 Here is another signed Padre card that was given to me by Rod of Padrographs fame. He hooked me up with this card when we met up at a Hillsboro Hops game in 2015.

Anthony pitched for the Padres for parts of three seasons before making stops with the Astros, Rangers, and Cubs. So far, for his career, he is 5-9 with 3 saves and a 4.51 ERA in nearly 300 innings of work.

Anthony only saw 15.1 innings of work last year with the Cubs, but he pitched rather well. He posted a 2.93 ERA and struck out 14 batters. That is the closest to a strikeout per inning that he has ever been.

It looks like Anthony is currently in Reds camp on a minor league deal trying to earn a spot in their 'pen.
at 6:54 AM