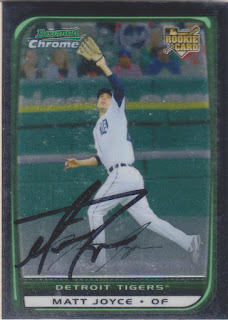 In 2009, a family friend was racing stock cars in the ARCA series. Every weekend, they were off with their car at some major race track across the country. One weekend, I got invited to go and I jumped at the chance. Even though I am not a race fan, I like road trips and a trip to Pocono Raceway in Pennsylvania sounded like a good time. Plus, the nearby Scranton/Wilkes-Barre Yankees were in town that weekend. Once I got confirmation that we would have time for a ballgame, I was all in.

The SWB Yankees were hosting the Durham Bulls that weekend. Though I had cards for both teams, I was only going to be able to 'graph one side of the field. I chose the Bulls. I did send my buddy over to the Yankee side to snag Butch Wynegar for my '81 Donruss set and he came though for me. Matt was playing for the Bulls at the time and he was nice enough to sign this one card for me.

It is pretty cool to be posting a card of a current player on here. That rarely happens on this blog. Matt spent last season with Oakland and had a rough season. In 83 games, he hit just .208 with 7 home runs and 15 RBI.

Matt's best season was with the Rays in 2011. That year, he had career highs in average (.277) and RBI (.277) while also knocking 19 home runs. He was rewarded for his efforts with his lone All Star Game selection. In that game, he was 1-2 with a single off of Joel Hanrahan in the top of the ninth.

To date, Matt is a .240 hitter with 138 home runs and 459 RBI for his career. Matt's contract with Oakland was up after last season and he is currently a free agent.

Here is an updated 2008 Bowman map. I think that there is just one more state to add to it. 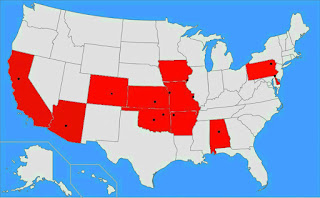