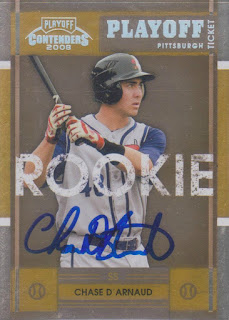 This is a card that I got signed at a Wilmington Blue Rocks game in 2009. Chase was playing for the visiting Lynchburg Hillcats at the time. The game I attended was a Carolina League playoff game that almost got rained out. They got the game in, but pregame was a little soggy which made the 'graphing rough. That day, I 'graphed the home team and I entrusted a buddy to get the Hillcats for me. I guess I didn't stress to him enough to not bother getting the players to sign if it was raining because he got me a few smeared autos. This one, however, came out unscathed and looks rather nice.

To date, Chase has played parts of seven seasons in the Majors with the Pirates, Phillies, Braves, Red Sox, Padres, and Giants. Over that time, he is a .222 hitter with 5 home runs and 40 RBI over 236 games. His best season was with the Braves in 2016 when he got into a career high 84 games and responded with a .245 average and a home run with 21 runs driven in.

Chase is currently playing for the Rangers AAA affiliate in Nashville and is off to a rough start. Through 17 games, he is hitting just .193. Considering that he played in the Majors as recently as last year, there is still time for him to get it going and get called up again.
at 9:04 AM