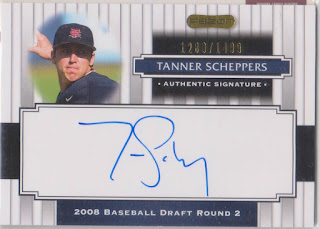 Here is a card that I bought off of COMC for a whopping $1.25. The only reason why I bought this card is because I had the pleasure of watching Tanner pitch in the American Association before he went to the Majors. While a couple of Wingnut players are currently playing in the Majors, I do not remember seeing them play in Wichita. But, I do remember Tanner pitching.

In 2008, Tanner was drafted in the second round by the Pirates. He and the Pirates could not agree to a contract before the deadline and Tanner re-entered the draft the following year. In order to stay fresh before the draft, Tanner signed with the St. Paul Saints. He pitched in four games with the Saints before getting drafted by the Rangers at the end of the first round. He signed that time around and his time in the American Association came to a close.

Tanner pitched in Japan last year and it looks like is not playing right now. He could be injured or he might not have a team to play for. I do not know. I bet that the Saints would take him back, though.

Even though it does not mention a team anywhere on this card, I am chalking this up as a Pirate card because they drafted him in 2008.