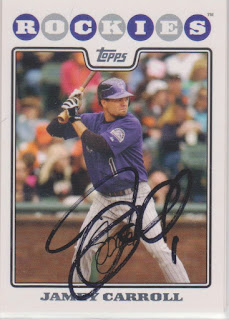 I have finally made it up to 2008 Topps. Prior to this year, it probably would have taken me at least four months to post the sixty or so cards from the set that I have got signed. But, now that I am (usually) only giving a player one post before lumping them into "Rest Of" set round-up, I should be able to get through this set in about a month.

So, here is the first card I have to post. It is a card of Jamey Carroll that I got signed at an Astros pre-season game in 2009. That spring, I had to head down to the Houston area for a cousin's wedding. The Astros had just wrapped up Spring Training in Florida and were home for two games against the Indians before the regular season started. They also hosted Fanfest during one of those games, so it worked out really well as I was able to get a lot of free Astros alumni autos while taking in a meaningless game. Jamey was playing for the Indians at the time and this was the only card I had of him to get signed.

Jamey wrapped up his twelve year career after the 2013 season. Over that time, he played with the Expos/Nationals, Rockies, Indians, Dodgers, Twins, and Royals. He was a career .272 hitter that had 13 home runs and 265 RBI. His best season was probably with the Rockies in 2006 when he hit .300 with 5 homers and 36 runs driven in.
at 1:59 PM