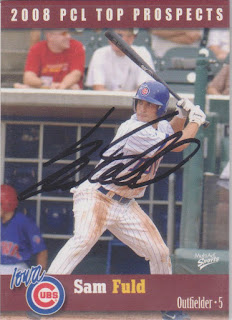 In 2008, I found myself at a Round Rock Express game and I ended up picking up this Top Prospects set. My thinking was that I could probably get quite a few of them signed. It turns out that I could only get three signed in the eleven years I have had the set. I got one that day, one the next month, and one the next year. This is the one I got in 2009. Sam was playing for the Iowa Cubs still and I got him in Des Moines between games of a doubleheader.

Sam spent parts of eight seasons in the Majors with the Cubs, Rays, A's, and Twins. Over that time, he hit .227 with 12 home runs and 112 RBI. One of his best seasons was in 2014 and it was also his craziest. He started off the year with the A's, but got picked up off waivers by the Twins in late April. He stayed with Minnesota up to the trade deadline when he was traded back to the A's for Tommy Milone. So, the A's basically traded a decent pitcher for a player that they had designated for assignment three months earlier. You do not see that everyday.