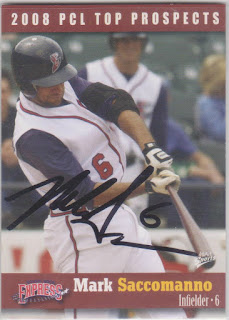 I bought this card and got it signed in August of 2008. Less than a month later, Mark would get called up to the Astros for a brief cup of coffee. He made it into ten games during his September call-up and went 2-10 with a double and home run. That .200 lifetime average and on-base percentage doesn't look too hot, but he makes up for it with a .600 slugging percentage.

As for the home run he hit, he got it in his first Major League at-bat. He pinch hit for the pitcher in the bottom of the fifth inning and hit the very first pitch he saw from Ian Snell for a dinger to put the 'Stros up 1-0. Houston tacked on two more runs that inning and pulled off a 3-2 victory. All three runs were scored with two outs.

Mark was back in Round Rock the next year. His numbers slacked off a bit from his '08 season and he never got called up again. The Astros released him after the season and the Marlins picked him up. He played one season in their organization and called it a career after the season ended.