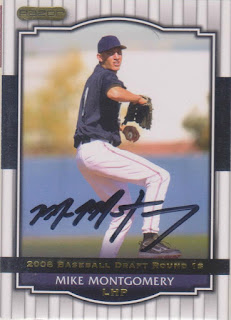 Back in the day, Mike Montgomery was a highly touted Royals prospect. That was the main reason that I got this card signed. In 2009, he was the Roylas minor league pitcher of the year. Because of that, he was at Royals Fanfest in 2010 when he signed this card.

Unfortunately, it never worked out for Mike when he was with the Royals. I heard a few different reasons for why that was, but the main one I heard was that the Royals deemed him uncoachable. He had a private pitching coach during his time as a Royal minor leaguer and he apparently valued his advice over any of the Royals coaches. So, prior to the 2013 season, the Royals packaged him in a deal with Wil Myers and sent them to the Rays for James Shields and Wade Davis. I would say that deal worked out well for the Royals.