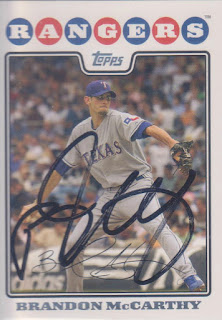 Here is a card that I got signed by Brandon McCarthy at a Rangers game in 2008. At the time, my grandparents were living in southern Texas and I went to visit them in early September. Since it was still baseball season and a fairly long drive, I took my time getting there and back by stopping at some ballgames. For that trip, I believe I caught games for the Round Rock Express, San Antonio Mission, Grand Prairie AirHogs, and the Texas Rangers. Brandon signed this card for me at the Rangers game.

Brandon pitched in the Majors for thirteen seasons and it looks like he called it a career after last year. Over that time, he pitched with the White Sox, Rangers, A's, Diamondbacks, Yankees, Dodgers, and Braves. He finished with a 69-75 record and a 4.20 ERA.

It looks like the toughest part of Brandon's career was staying healthy. Minus a full season out of the the Sox pen in 2006, he only pitched in 30 games once in his career. Coincidentally, that was the only season that he ever reached double digits in wins. Once he became a full time starter in 2007, he only averaged 17 starts a season.

Brandon had his best season in 2011 with the A's. That year, he finished the season 9-9 with a 3.32 ERA and a career-high 123 strikeouts. The crazy part is that he missed all of the 2010 season to a shoulder injury, but came back in 2011 and threw five complete games with one being a shutout. Had his team given him some run support that season, he probably would have had only one complete game (the shutout). Three of the complete games were on the road with the A's losing, so Brandon only had to toss eight innings to get credit for it. The fifth complete game was in Kansas City where Brandon took the mound in the ninth inning of a tie game before losing on a sac fly with one out. So, that was an 8.1 inning shutout. For his five shutouts, he was 1-4 and his offense averaged 1.8 runs a game while being outscored by two runs over the five contests.
at 11:42 AM