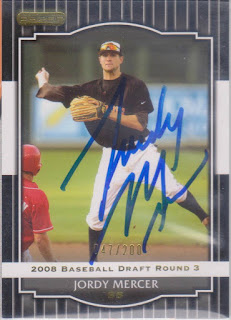 Here is another card that I got signed at the Wilmington Blue Rocks playoff game in 2009. Jordy was playing for the visiting Lynchburg Hillcats at the time and I was lucky that my buddy was able to get this card signed for me and that it came out looking this good. I mention that last part because it was kind of raining when he got this card signed and one of the cards Jordy signed got hit with a rain drop and kind of ruined the signature. The third card he signed looked like it might not have got prepped and got pelted with two rain drops. But, at least this one came out looking great!

Looking back at my lone trip to a baseball game in Delaware, I am kind of surprised by the percentage of autographs that I got that went on to appear in the Majors. Minus a couple of Rocks that I got for my Burlington Bees team set, I would guess that at least 85% of the players that signed for me that day at least appeared in the Major Leagues. That seems pretty good for an A ball game.

As for Jordy, he is currently playing for the Tigers, but is on the IL right now (I might never get used to saying/typing IL). This is his eighth season in the Majors and he has been rather consistent so far in his career. His numbers are a bit down right now, but he typically is good for a .255 average with about 10 homers and 50 RBI.

I am pretty sure that Jordy is pictured in his Oklahoma State uniform here, which means that I most likely saw him play in college. I went to a Wichita State game in 2007 where they hosted the Cowpokes, so there is a good chance that Jordy played in that game.

That is two posts in a row of current players. That is unheard of on here. Just wait until the next post when it makes it to three straight. Just for fun, if anyone actually makes it down this far in the post, leave a comment on who you think the next player is. Here is a hint- the card is from this set. There may be prizes involved just for making a guess.