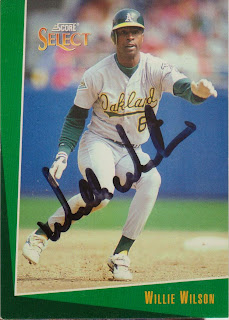 It has been over a year since I posted a card of Willie Wilson. The last one I posted was his '81 Donruss card and that one can be seen here. You can check out a few other Wilson cards from the blog's early days here, here, and here.

This card, like the '81 Donruss, was signed at a Royals Caravan stop in early 2013. After a three year exile from my home town, the Royals Caravan returned that year with Willie, Aaron Crow, Everett Teaford, and Eric Hosmer. It was a pretty good selection and I thoroughly enjoyed the event. However, it was a short-lived reprieve as the Caravan bypassed Salina again this year. Why this happens is unknown to me. I know that turn-out wasn't super-awesome, but what do they expect when they announce it three days prior and schedule it mid-day on a Thursday?

Before getting some cards signed by Willie at the Caravan stop, I had gotten three cards signed by him in 2008 after I had jumped back into autograph collecting. I picked out cards then based on the first ones I found. Nowadays, I try to be more choosy if I have the time to be. So, when I got cards signed by Willie last year, I took my '81 Donruss and two non-Royals cards since all of my other signed cards were him as a Royal. That is how I came to have a signed A's card of him.

Willie joined the A's for the 1992 season after fifteen seasons in Kansas City. He had a rough year his first year in Oakland and hit just .238. That was the lowest average he had posted since his first full season in the Majors in 1978. But, he bounced back the next season and had an average of .270.

Willie seemed a little surprised to see an A's card of himself. I handed it to him and and he just stopped and looked at it for a few seconds. He then showed it off to Everett Teaford and started telling him about the place he had in the Bay Area.
at 12:08 PM