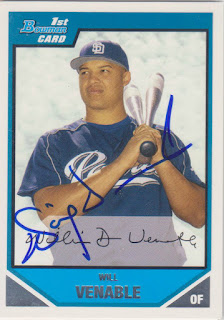 Here is a card of Will Venable that I got signed in Salt Lake City in 2008. Will was playing AAA ball for the now defunct Portland Beavers at the time. He signed this lone card for me prior to the start of the game.

Will made his Major League debut a couple of months after signing this card and he has been a mainstay in the Padres outfield ever since. He has spent most of his time playing right field, but not this season. This year, he has predominantly played center with Will Myers hurt for much of the season.

Will is a career .252 hitter at this point in his career. His best season came in 2013 when he had career highs in average (.268), home runs (22), and RBI (53). Will was also a stolen base threat for a bit, swiping 20+ bags for four straight seasons. He seems to have tailed off on attempted steals over the past couple of seasons, though.

Will is currently hitting .258 with 5 home runs and 18 RBI. He is the son of former Major Leaguer Max Venable and he played his college ball at Princeton.

Speaking of college ball, Miami got eliminated yesterday. LSU and TCU square off again today with the loser going home. There will then be four teams left in Omaha- Vanderbilt, Florida, and Virginia. Nobody picked Virginia to make it to the finals.
at 11:53 AM