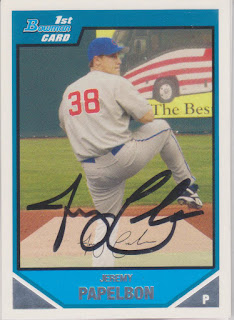 Here is the next card from 2007 Bowman and it features minor leaguer Jeremy Papelbon. I got this card signed by him at the 2010 Rickwood Classic in Birmingham, Alabama.

The Rickwood Classic always features a former ballplayer to throw out the first pitch and to sign autographs during the game. I got lucky the year I went as Harmon Killebrew was that guy. While the pregame introductions were going on before the game, Jeremy Papelbon made sure to go out on the field and get a ball signed by Harmon. He signed my card shortly afterwards and I asked him if he was a collector or if he just wanted Harmon's autograph. He told me he is a collector. It is always good to see someone that plays the game is also a fan of the game as well.

My friend, Dustin, just happened to snap a picture of Jeremy right after he signed for me. 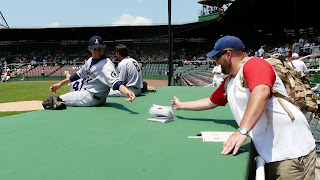 I got back from the College World Series yesterday and it was kind of a disappointing weekend. We had planned on going to two games, one of Saturday and one on Sunday. We went to the Florida/Miami game Saturday evening and that ended up being the only game we attended. We intended to see the TCU/LSU game yesterday. We got to the park early to buy tickets for the game. Unfortunately, I had forgotten how well LSU fans traveled. There was no chance of us buying reserved seats from the box office with so many Tiger fans in Omaha. We did not want to do general admission for the game, so I did a few laps around the park and parking lots hoping to find someone with tickets to the game. All I could find were the usual scalpers that were wanting at least $75 a ticket. I was not about to drop that kind of money for a first round game, so we decided not to go. My wife was not feeling too well as it was, so it was probably best we only went to one game.

The worst part of the weekend, though, were the autograph lines. Those things have always been a little iffy as to what you can get signed. Sometimes they will sign anything, sometimes just the provided 8x10s. You just never know. This year, they had Curt Schilling, Dave Winfield, and Frank Thomas signing autographs. All three of them would only sign the 8x10s. I was hoping to add some new signed cards by a couple of Hall of Famers to my collection, but it did not happen.

And, as if that was not bad enough, I had the number one draft pick, Dansby Swanson, one on one Friday and he told me he couldn't sign at that time. It was just an overall bummer on the 'graphing front.

But, I got some cool 8x10s signed to be given out for the contest. I will post them later on this week so people can see what they are competing for.

On the bright side, we did get to see Florida tie a CWS record by scoring 11 runs in one inning. You do not see that every year in Omaha.
at 2:20 PM