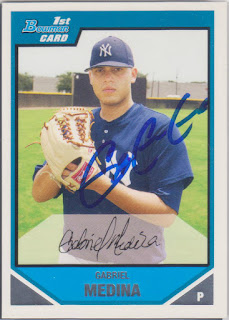 Now that the College World Series is over, it is back to my normal posting schedule. I am already looking forward to next year's contest, though.

Here is a card that I got signed at a Wichita Wingnuts game in 2010. Gabe was pitching for the Nuts that season and I was able to get a couple of these signed during the course of the year.

Gabe was drafted by the Yankees in 15th round of the 2006 draft out of Emporia State, a school just down the road from me. He played in the Yankees system for three seasons, never advancing above A ball. He finished his affiliated career with a 9-6 record with 2 saves and a 3.94 ERA.