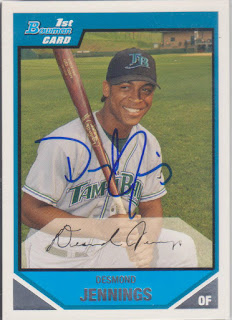 Here is a card that I got signed at the 2009 Futures Game in St. Louis. At that point, this was the only card of Desmond that I could get my hands on to take with me.

Desmond made his Major League debut the next season when he was a September call-up for the Rays. He got the start on the first day of September and went 0-3 with a strikeout against the Blue Jays. He got his first hit ten days later and finished that first month hitting .190.

He started 2011 in AAA before getting the call in July. He got off to a blistering start for his second go-around in the Majors. After a 2 for 3 day for his first start, he went on to have multi-hit games game in five of his first six games that year. That sixth game was a 3 for 4 game where he had four RBI and hit his first Major League home run. He went on to finish the season hitting .259 with 10 home runs and 25 RBI in just 63 games.

He would be an everyday player for the Rays after that season and has put up consistent numbers every year. He usually hits about .250 with 10-14 home runs and about 50 RBI. He did knock in 64 runs in 2013, his best total to date.

Things took a turn for the worse this year, though, when Desmond was battling some knee soreness. He missed some games before being put on the disabled list in May. He tried to rehab the knee, but ended up having surgery on it earlier this month. As of right now, there is no timetable for his return.