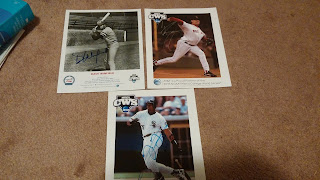 Here is the majority of the prizes for this year's CWS Contest. The prizes consist of 8x10s signed by Dave Winfield, Curt Schilling, and Frank Thomas. I may also throw in a pack of Series 2 or Archives and there may be an added prize that I throw in a month later. But, that remains to be seen. Just expect these three photos and a pack of cards.

As for as the tourney, Vanderbilt is in the finals. Florida and Virginia are duking it out right now with Virginia with the late lead. If they hang on to win, this contest is already done. If Florida comes back, the contest will then be done. Three people picked Vandy in the finals and all three picked them to win it. Nobody picked Virginia or Florida to win. So, barring a tie, the contest will wrap up tonight. I haven't taken the time to tally points, so a tie is still a possibility. My family is taking me to Kansas City tomorrow for Father's Day. If I get back at a decent time, I will post the results. Otherwise, I will post them tomorrow.
at 10:18 PM