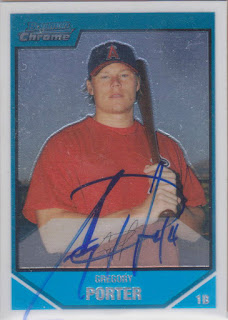 Here is the first of three cards signed by Greg Porter from his time in the American Association. All three cards are some sort of a 2007 Bowman. This one was signed at the Am-Ass All Star Game that was held in Wichita in 2010. Greg was playing for the Grand Prairie AirHogs at the time.

Greg Porter was a stud in the Am-Ass and was a joy to watch. He played for Wichita for a season and a half and he absolutely tore up the league with them in 2009. In 95 games, Greg hit .372 with 21 home runs and 86 RBI. He was the first big-time player the Nuts had and was a huge part in helping to build the team into the franchise that it is today. He won the batting title that seasons and was named the MVP of the league and Baseball America's Independent Player of the Year. It was quite a season.

But, being an independent league, the Nuts traded Greg to Grand Prairie during the offseason so Greg could be close to home.
at 6:07 PM